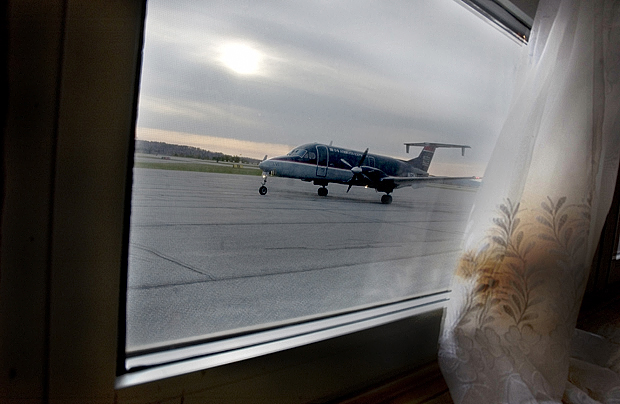 /Looking out the window of the Thai Lanna Restaurant, Augusta Maine State Airport./
I recently read an article about something called High Dynamic Range Photography in a photojournalism magazine. I decided to attempt an HDR image using my own simplified technique. If you look at the HDR photographer Trey Ratcliff's website you will see what HDR is shooting for. Everything in the images seem to be vibrant and in focus.

Usually you use multiple images bracketed with different exposures to make one HDR image. I think in some cases it would give the same effect as having taken a crisp, bright exposure with a nearly-closed aperture.

The magazine article I read about HDR photography, and the article on Wikipedia fail to mention an early photographer that I think is a father on this technique, Gustave Le Gray. Specifically his 1857 image in which he takes 2 exposures of the same beach scene and combines them to make a single more realistic view. The Wikipedia article places the beginning of HDR photography in 1930s and 40s with photographer Charles Wyckoff. Wyckoff took early HDR-type photos of nuclear explosions that appeared on the cover of Life magazine.
Posted by mike c at 4/25/2008 11:03:00 PM