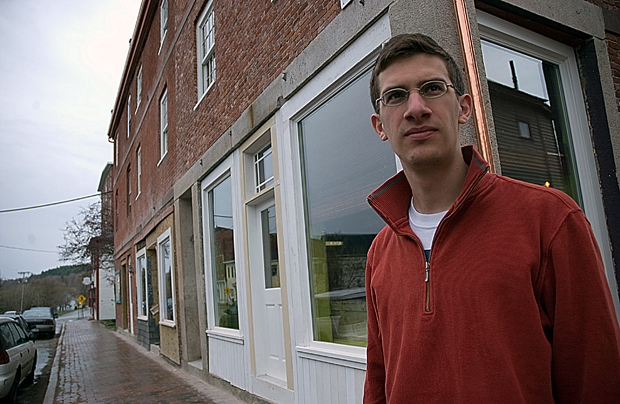 I met Matt Stone at Hallowell's own famous Slate's Restaurant & Bakery for brunch. It has just reopened this month after a fire destroyed it last year.
Matt recently stopped fasting for Passover (aka Jewish Lent).
We started talking about levels of devotion. He said he wasn't really that devout (aka hasidic). But as a catholic I am familiar with far lesser levels of devotion.
I've seen an entire group of catholics (aka members of my family), order multiple pizzas on a Lent Friday -- all with meat. We had to eat them. Our catholic devotion to wastelessness outweighed our catholic devotion to superstition -- I mean tradition.
No need to live the story again. No need to keep these things alive. No sense in being John Malcovich. Can't we find ways other than religion to extend our lives into near eternity? Isn't technology taking the place of religion? Or if we had more responsible caretakers maybe cryogenics would.
We could combine different beliefs together to MAKE IT!
Are you with me?
Recipe for the eternalnaut:
Religion: in the person to make sure they have the spirit for the journey. (Because being that person would be #@& nuts!) Also religion and "spiritual beliefs" act well with the luck and superstition you would need to keep you from thinking, "Is this really worth it?" Science: in the cryogenic freezing process. To freeze us like frogs hibernating. And then waking us up every season. Technology: some sort of timeslessly simple technology. Something that has already worked for millions of years -- that would make sure our Eternal Rest was going as planned. Imagine them as robotic guardians or archangels waking us up every millennium or so and totally freaking out whatever is around.
Set the meat pizzas over there, here's a tip. See you in like 1,000 years.
Great story. I'll try to keep it alive in the Big Story. I'll run it right under the Big Picture. And contribute both as staff reports with special thanks to: Allah, Buddha, Stephen Hawking, Stephen King, Stephen Crowley, and my cousin Steven in Pittsburgh, Pa. (Who was "raised catholic" by my aunt, Veronica).
Our hearts are alive with the memory of the sacrifices of the ancestors and the predecessors. Amen.
Posted by mike c at 4/28/2008 12:26:00 AM