Speaker Circuit: I'm thinking about joining the 'speaker circuit.' It's similar to the 'art gallery circuit.' Last night I went to a talk by Jason Opel, Colby College assistant history professor. It was called, 'Chaos, Catastrophe, and National Destiny: Early Jamestown in Global Perspective.' Free class; well worth it. 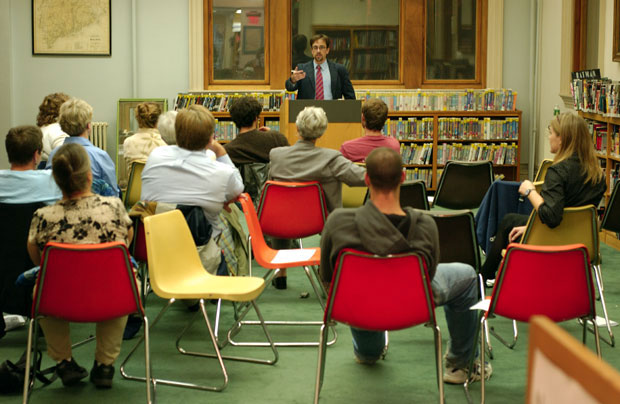 7 p.m., 101007, Waterville Public Library, Maine: (I thought that I was new to the lecturer circuit, but I guess I'm not. I went to a lecture by a well-know photographer Tim Davis maybe a year ago at D.C.'s Bridge Street Books. My friend Andy McMillan pointed me out at the back of a Tim Davis photo, in one of his projects called, 'My Audience'. Cool. That's me in the back.)

Outline:
Chaos, Catastrophe, and National Destiny: Early Jamestown in Global Perspective
Introduction: What's in an anniversary?
I.A Sequence of Events
- The Company and its miscalculations
- Laws Divine, Moral, and [especially] Martial
- Towards slavery
II.Chaos: Masterless Men, 'Blackymore Maids,' and Black Dogs
- Discovering the Ocean
- Redefining Property
- 'A Prison Without Walls'
III. Catastrophe: Lost Colonies, Shipwrecks, and ELEs*
- 'I dare to say it'
- Rats, pigs, and pathogens
- War without mercy
IV. National Destiny: 'This Blessed Plot' and its promoters
- Protestant Nationalism
- The 'Black Legend'
- When the Crown took over
Conclusion: Taking the Step 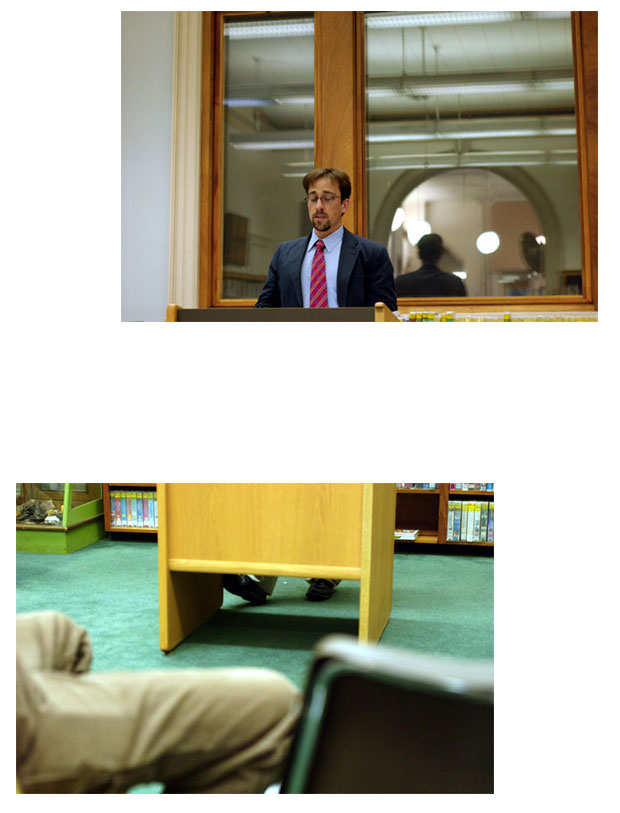 Some Interesting Points:
Chaos: Virginia was a giant tobacco plantation used to cleanse London of Irish and blacks.
Catastrophe: Over the course of a century smallpox, finding its way into pockets of communities, kills 90 percent of the Native American population. Bermuda, the result of a shipwreck, is one of the most successful colonies.
National Destiny: Protestants invent nationalism. The creation of the Church of England took away the umbrella that united much of the world under Catholicism. 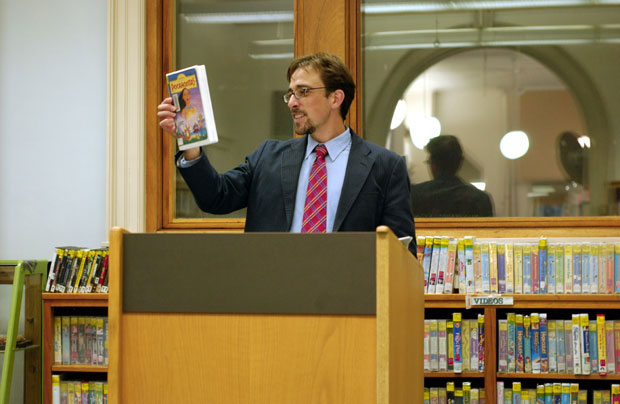 Historical Accuracy: After the lecture, finding a visual aid within arms reach on the children videos shelf of the Waterville Public Library, Opal discussed the historical accuracy ... of history.
My Conclusion: In an attempt to learn something, I did.
As Nancy Hill, a member of the Maine Development Foundation, told me after the discussion, 'If you're going to move to a small town it has to have a college in it.' 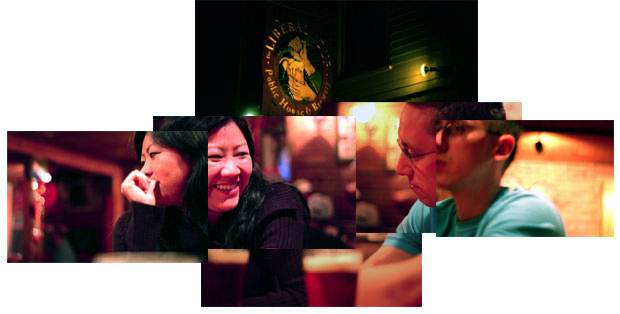 I saw Sandi and Jason last night. Sandi is Corcoran College graduating class of 2006, me too. She and her boyfriend Jason are up here from D.C. visiting Jason's parents for a week. We three went to Hattie's Chowder House and the Liberal Cup, in Hallowell, Maine. At the Liberal Cup they make their own beer. It's nice.
What did we talk about? Mooses, D.C., New England, the velocity of similar rounds from different grained cartridges. This is Maine.
Posted by mike c at 10/11/2007 01:50:00 PM