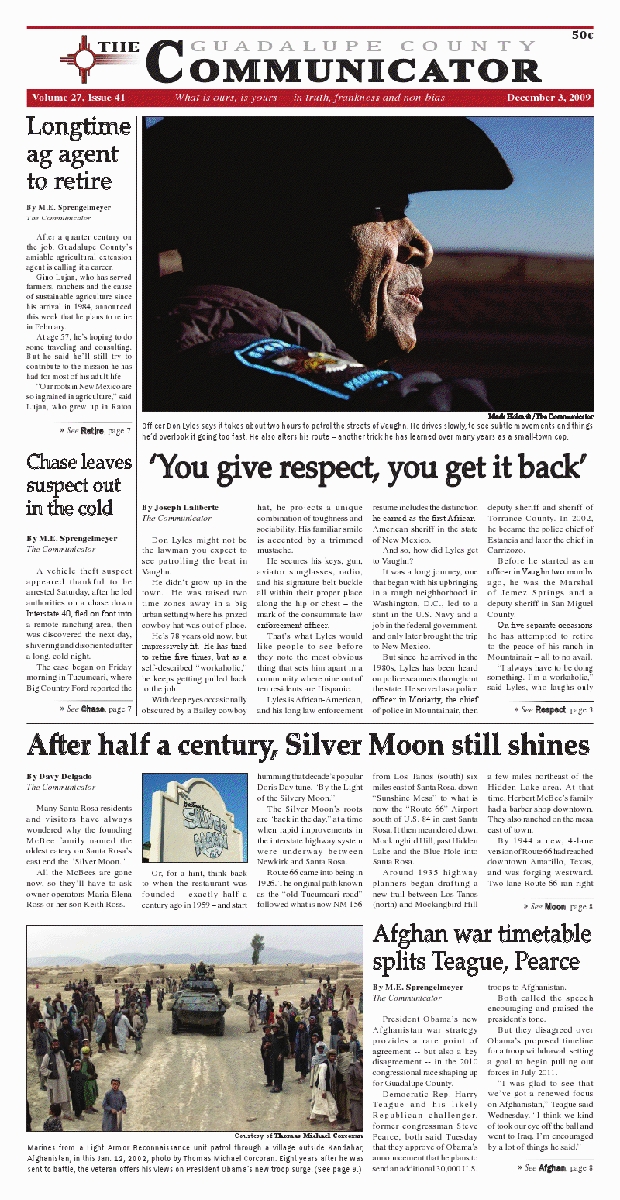 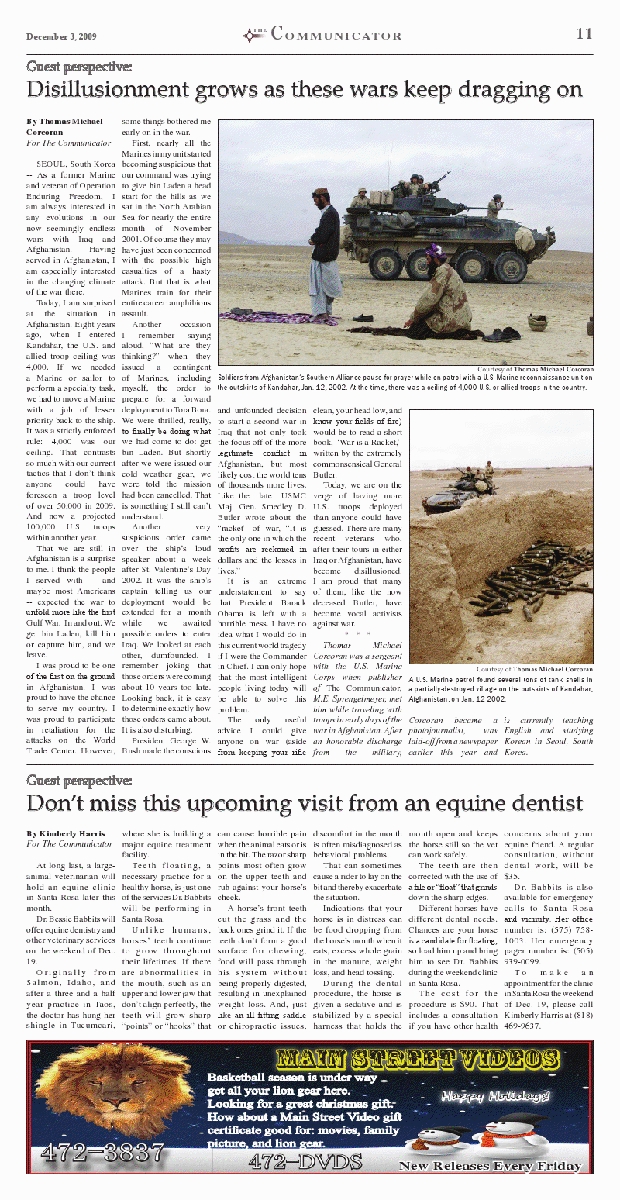 I contributed an article and some photo's to my friend M.E. Sprengelmeyer's newspaper in New Mexico. I met him while covering the beginning of the current war in Afghanistan.

SEOUL, South Korea -- As a former Marine and veteran of Operation Enduring Freedom, I am always interested in any evolutions in our, now, seemingly endless wars with Iraq and Afghanistan. Having served in Afghanistan, I am especially interested in the changing climate of the war there.
Today, I am surprised at the situation in Afghanistan. Eight years ago, when I entered Kandahar, the U.S. and allied troop ceiling was 4,000. If we needed a Marine or sailor to perform a specialty task, we had to move a Marine with a job of lesser priority back to the ship. It was a strictly enforced rule, 4,000 was our ceiling. That contrasts so much with our current tactics that I don't think anyone could have foreseen a troop level of over 50,000 in 2009. And now a projected 100,000 U.S. troops within another year.
That we are still in Afghanistan is a surprise to me. I think the people I served with, and maybe most Americans, expected the war to unfold more like the first Gulf War -- in and out. We get bin Laden, kill him or capture him, and we leave.
I was proud to be one of the first on the ground in Afghanistan. I was proud to have the chance to serve my country. I was proud to participate in retaliation for the attacks on the World Trade Center. However, some things bothered me early on in the war.
First, nearly all the Marines in my unit started becoming suspicious that our command was trying to give bin Laden a head start for the hills as we sat in the North Arabian Sea for nearly the entire month of November 2001. Of course they may have just been concerned with the possible high casualties of a hasty attack. But that is what Marines train for their entire career, amphibious assault.
Another occasion I remember saying aloud, "What are they thinking?!" is when they issued a contingent of Marines, including myself, the order to prepare for a forward deployment to Tora Bora. We were thrilled; really, to finally be doing what we had come to do, get bin Laden. But shortly after we were issued our cold weather gear we were told the mission had been cancelled. That is something I still can't understand!
Another very suspicious order came over the ship's loud speaker about a week after St. Valentine's Day 2002. It was the ship's captain telling us our deployment would be extended for a month while we awaited possible orders to enter Iraq. We looked at each other, dumfounded. I remember joking that those orders were coming about 10 years too late! Looking back, it is easy to determine exactly how those orders came about. It is also disturbing.
President George W. Bush made the conscious and unfounded decision to start a second war in Iraq that not only took the focus off of the more legitimate conflict in Afghanistan, but most likely cost the world tens of thousands more lives. Like USMC Maj. Gen. Smedley D. Butler wrote about the "racket" of war, "It is the only one in which the profits are reckoned in dollars and the losses in lives."
It is an extreme understatement to say that President Barack Obama is left with a horrible mess. I have no idea what I would do in this current world tragedy if I was the Commander in Chief. I can only hope that the most intelligent people living today will be able to solve this problem. The only useful advice I could give anyone on war (aside from keep your rifle clean, your head low, and know your fields of fire) would be to read a short book written by the extremely commonsensical Gen. Butler, War is a Racket.
Today, we are on the verge of having more U.S. troops deployed than anyone could have guessed. There are many recent veterans who, after their tours in either Iraq or Afghanistan, have become disillusioned. I am proud that many of them, like the now deceased Butler, have become vocal activists against war.
Posted by mike c at 12/03/2009 06:49:00 PM