A Walk to the Maine State Museum: $2

A 2 cent euro I found in my pocket is only one of the things that made me secondthink all the crap my friends give me about the 'unworldliness' of Augusta, Maine. One of the other things might be the well-designed dioramas in Maine's State Library, Museum & Archives. (Also, our K-Mart.)
I stopped to stare at a pile of red leaves in the green grass. I heard some cars pass behind me. They must have thought I was insane. I know I've done the same thing in D.C. and other places before, stood in awe at the beauty of natural things, but it seems more dramatic here in Maine, New England, USA. We're surrounded by trees.

From my house to the State Museum is only a five minute walk. They recently started charging Augusta residents for admission, but according to a brochure, it had been free until a few months ago. But the library is nearly worldclass, minus a coffee shop. 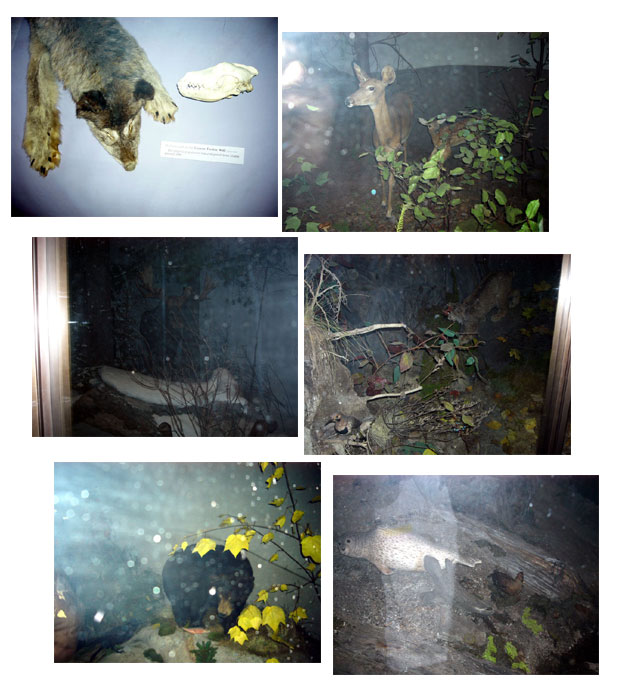 A Tribute to Tim Davis' 'Permanent Collection': I decided to do a tribute to Tim Davis' body of work entitled 'Permanent Collection'. It is a cool piece. Many will think differently, but I love both the procurement of others' art and the blatant use of flash. My friend Andy McMillan described him as essentially 'punk rock.' Dig it.
I overheard some parents and presumably grandparents trying to explain the difference between 'real' and 'alive' to their young museumgoer. It was as interesting as the Maine wildlife exhibit.
By the way, the first moose I've seen so far was here, in the Maine State Museum. Hey, it wasn't alive, but it was real!

Better-than-Smithsonian Dioramas: The dioramas at the Maine State Museum are better than the Smithsonian's, really. One of them is the inside of an old water-powered mill; it is a three-story sculpture.
Again, the things I overheard were as interesting as the exhibits themselves. I heard some museumgoers in the 'Made in Maine' exhibit telling their youngsters about their older relatives (who I think were neither 'alive' nor, hopefully not in the taxidermical sense, 'real') who had worked in the very mills and industries that the dioramas depicted.
Two older couples talked about whether it was rich people who used to have horses for riding, or if it was those who couldn't afford tractors. 'Geez, this is a magnificent museum,' an older man said. 'It is a magnificent magician ... museum,' said an older woman. 'The AAA Magazine called this museum a gem.'
And with those words Augusta, Maine is immediately shot back into the 1950s.

The Strange and Amazing!, step this way: Two of the strangest displays:
-Two moose heads 'stuck in a rut,' 'locked antlers.' These two moose were found this way, died in combat after being locked together in an eternal war. Crazy Maine Moose.
-A chair made of antlers and hides. It was in the Maine Stathouse, and hunters would come and touch it for luck. (I had a chair like that made out of poodles.) Crazy Maine Hunters.