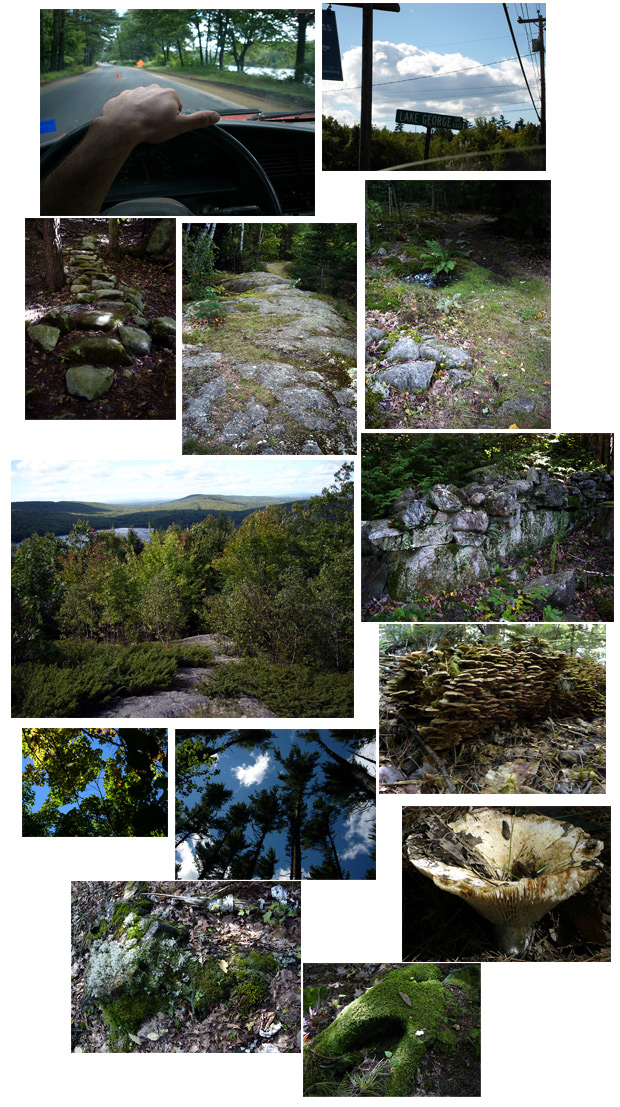 It was fun just walking through the trails at Lake George. Every step seemed like some place new. Ahhhhhh ... I actually caught myself in the cliche of taking in deep breaths of green forest smells, followed by long satisfying exhales.
I thought, if we hadn't killed of so many species already I'd be a little afraid of something wild trying to eat me out here. That seemed like a good feeling too, one that I might not have had for a couple hundred years.
You can get lost 'just enough' (crappy trail maps make that a lot easier), walking through all the trails. Lake George is large, and long as you remain conscious of it, you'll never get lost, it seems. And, you might find yourself (as I did), picking up rocks, poking at slugs, and admiring mushrooms.
The trees were extremely noisy; sometimes like a distant chainsaw. Sometimes whining. Always the loud hush of wind waving through them. 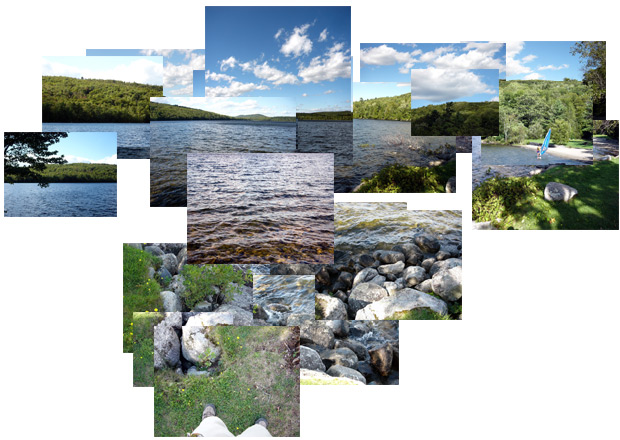 Looking for the 'Scenic View,' I've already taken the wrong direction & ended up:
-in a school yard w/ kids at recess
-at a trail head, where I picked up a near-useless map (of unmarked trails)
-and just as I was starting to feel like a human animal, on the right track, I popped out in someones backyard, by a clothesline in full use.
I headed back into the trails and decided I should just head for high ground. And, after about 10 minutes I ended up in someone else's yard. But it appeared no one was home, so I pressed on at the edge of the tree line. (Probably like Big Foot, or just another Maine psycho making his way to work in the evening.) I started running higher and higher, through the space between the trees. Spaces, that to me, appeared to be nothing but countless trails. Just as I was going to start worrying I ran across a marker, and a well-worn path. & about 200 more feet up the path I found the 'Scenic View.' It was. I enjoyed it and the craggy area it was located in for 20 minutes, then started my decent, passing the only other hiker I'd seen all day. I stopped to write something down and he passed me on his way back.
"Whoa! You scared me!" I said. "Heh," he laughed. Everyone laughed, even the trees.
Further down I started off the trail again. According to the map the trail was leading me in the wrong direction. The woods leading down to the side of Lake George seemed alive. Not with activity, but literally in a sometimes creepy way. These weren't the woods of European myths, these were the woods of the American Indian myths, tales, past, history, legends. I leaned against a tree and it yelled at me not to lean there. A high-pitched alien, not-heard-by-humans yell.
(Below: me as a human animal, notice the gables of someone's home through the trees.)

There were ferns and moss, and fresh animal sign that made it alive too! Mushrooms and leaves as brightly colored as tropical fish. Alive!