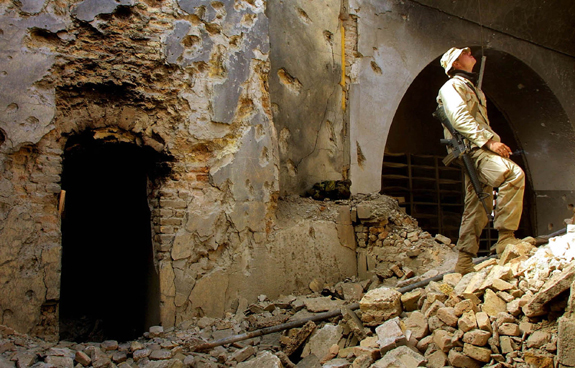 I have also been asked to be part of an anti-war show at Busboys & Poets. I might even read in their anti-war poetry reading. I am a member of Vets for Peace. Maybe I have time to grow the old 'stache back before Monday. (Photo by Mario Tama)

March 19, 2007 (Monday) Observance of the 4th anniversary of the U.S. military assault on Iraq and the beginning of what has turned into one of this nation's longest military engagements. Four years of war and occupation; four years of death and destruction; four years of a war that never should have happened.
Gallery Event 6:00 PM
Reflections in War, Visions for Peace: Artist Perspectives on Four War Years
Four years from the night President Bush ordered war operations across Iraq announcing an unprecedented war, the public can see works by dissenting artists who include those most affected: Iraq War Veterans and Iraqi citizens. Artwork may be purchased for the benefit of participating artists and organizations. Refreshments are provided.
7 PM DISCUSS - Artists and policy experts host a discussion exploring the historic and future significance art holds as a catalyst for change in culture and ultimately, government policy - as well as strategic collaborations that must be strengthened between artists and progressive activists.
8 PM DISSENT -Wordsmiths crash the microphone with dissent, from the sky falls poetry peace-bent. Poets from across the Nation offer crash-course Iraq analysis, for the uninformed.
SPONSORS: Institute for Policy Studies, Code Pink, Iraq Veterans Against the War, Military Families Speak Out, Iraqi Voices for Peace and Busboys and Poets
Posted by mike c at 3/16/2007 06:56:00 PM